How AI and Machine Learning can make Enterprises More Competitive

One of the biggest challenges that a hospital emergency room faces is capturing the accurate reason for the patient’s visit- also called chief complaint in medical terminology.

Traditionally, doctors and nurses ask patients questions, arrive at a few probable diagnoses, correlate them with the patient’s medical history, and then decide on a course of treatment.

If there is even a single error throughout the entire process the outcome can be fatal.

Machine Learning or something else.
Let's help you with your IT project.
Contact Us

This is why Beth Israel Deaconess Medical Center in Boston is using data science and machine learning algorithms integrated with normal clinical processes to make the job of collecting chief complaints simpler and more accurate.

Natural language processing converts unstructured notes made by doctors and nurses into structured data on the frontend which can then be cross-referenced with existing datasets by a predictive analytics engine to throw up the five most probable chief complaints.

This system has increased the accuracy of this vital step from 25% to 95%.

How AI is improving customer experience

Hospitals are not the only ones leveraging the power of machine learning, AI and smart robots. A whole range of companies, from retailers and manufacturers to financial services companies are using AI to parse massive amounts of data and determine patterns that can help them take faster business decisions and provide customers a better experience. 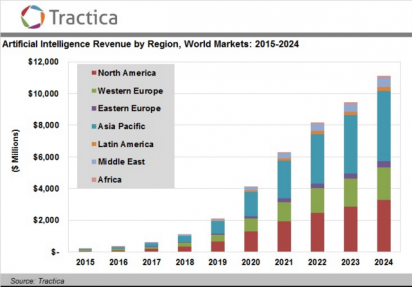 Amazon is blazing a trail in this field. Using past purchase data it can start moving products to a customer’s doorstep so that by the time the customer actually places an order the product would be nearly there.

Gilt Groupe, a high-end fashion and homewares retailer is heavily investing in data science and predictive algorithms to find out, using a set of objective and subjective factors, which items on their inventory makes sense to move closer to the customer.

This is what Igor Elbert, data scientist at Gilt has to say about the process:

Assembling the data set: to understand which attributes are predictive, to get reliable data, to clean it [is the biggest challenge]…

[I look] at sets of attributes, which basically break down into three groups: The first is objective parameters like product metadata…I look at the season, prices, ratio of our sale prices to original prices…

The second group of parameters relates to the sale day: How will this particular day shape up? I look at number and type of sales, inventory depth and breadth, brands that are offered…

The third group is purely subjective: I show an image of the product through ‘Mechanical Turk’ [Amazon’s crowdsourced platform similar to a survey] to a random group of people and I ask them to tell me about the product…assign adjectives…

…I’ll ask, is [a dress] pretty, weird, unusual, sexy, formal—like, 15 different adjectives. I’ll ask them what the dress is good for—a dinner party, a prom or something else. I’ll ask if they think the dress will sell well. I’ll ask if the dress looks expensive, moderately expensive [or] inexpensive.

These questions let Gilt quantify the risk of a particular item. All the answers are fed into the algorithm which tells which items are low risk and likely to sell well in a particular geographical area. These items are then shipped to regional hubs in anticipation of the order.

Gilt is using this method on a part of their inventory but has plans to expand it to all the items they offer.

There are other advantages to carrying out this exercise.

Not only does this data help Gilt shop products faster to customers but it also offers valuable insights. It can tell, for example whether a dress is priced suitably, or the impact of product photo or a human model has on sales.

The role of CIOs in enterprise AI

AI and machine learning is an evolving and an immature field, and IT leaders won’t have access to a fixed playbook. That said, there has been plenty of initial research on the topic, with Garner releasing the hype cycle on smart machines in July.

Some of the technologies and the corresponding stages are as follows:

So what can a CIO do to expedite the march of smart machines in the enterprise? Here are some suggestions:

In Beth Israel doctors, assisted by computer scientists, led the development of the predictive model. CIOs should lead in setting up cross-departmental teams with key members drawn from among the target user base. These teams need to be agile, experiment rapidly, fail fast, and have rapid development cycles. Building a team like this also lets CIOs focus on the type of skills needed to implement AI programs in the enterprise.

Machine learning and artificial intelligence places a lot of strain on existing software and silicon. Successful AI projects have often incorporated technologies like server virtualization and Hadoop, with increase in processing power. Success in AI needs sustained investment, and IT budgets will need to reflect this reality.

Robots are now a common fixture in assembly lines and in other workplace environments. While they are largely a part of the operational system they will become smarter, learn from their environment, and start to generate data which can be fed into business processes. CIOs will have to lead efforts to integrate robots with IT systems like databases so that there are no data black holes.

While robots are accepted in menial tasks employees might have trust issues with AI in critical roles like career counseling. CIOs will have to focus on creating a culture of collaboration between humans and robots so that employees start becoming familiar with robots and trust their output.

While AI is still nowhere as developed as to replace a skilled employee it can be used to complement the capabilities of humans, and let workers become more efficient.

Consumers have already sampled the capabilities of AI like Siri, Google Now, and Cortana on their phones and tablets: it’s now the turn of enterprise to get value from AI.

Since the beginning of civilization, man has been fishing for knowledge and wisdom Information has...

Machine learning systems are one of the most powerful tools for extracting insights from large...

For almost a decade, Robotic Process Automation (RPA) has taken business automation to an entirely...

In today’s business environments market personalization has become of the utmost importance With...

Keeping ML models on track with greater safety and predictability

As Machine Learning (ML) systems become more pervasive than ever before, the stakes are getting...